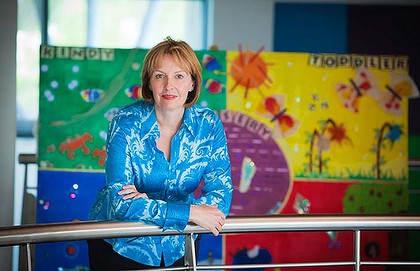 Julia Davison, the founding CEO of Goodstart Early Learning, will be standing down from the role at the end of 2022 after serving eleven years at the helm of Australia’s largest not-for-profit early childhood education and care provider.

Goodstart Early Learning’s Chair, Paul Robertson said Julia’s decision was based on her strong commitment to leadership renewal which allows for new ideas and new perspectives.

“Julia is an extraordinary leader, she has juggled the tension of running a billion-dollar national enterprise with business discipline, which was financially precarious when it was first created, with a constant drive to provide the very best possible learning outcomes for all children in the years before school, and not just those able to attend one of Goodstart’s 640 centres,” he said.

“As our founding CEO Julia has overseen Goodstart’s journey to financial stability, quality improvement and empowering centre teams to take the lead. At the same time her commitment and passion has ensured the organisation also focused on social inclusion, reconciliation and safety.”

Ms Davison joined Goodstart In February 2011, around eight months after Robin Crawford, the founding Chair of the Group, along with a consortium of major charities, dealmakers and financiers took control of the remnants of ABC Early Learning and founded what is now known as Goodstart Early Learning.

At that point in time Goodstart had around 660 centres and 15,000 team members, but as a new kind of social venture that had never been launched at scale Ms Davison and her team had a very material challenge ahead of them to transform the organisation into the sustainable, early education powerhouse that it is today.

Ms Davison noted that today’s Goodstart is a very different organisation to the one she joined in 2011 saying “We are now a unique social enterprise which is well and truly delivering on the aspirations of its founders. We have endeavoured to keep children and our purpose central to everything we do.”

“I love Goodstart and everything we stand for. I love our purpose and our people and I love my job as CEO. However, I strongly believe in leadership renewal and the need for new ideas and new perspectives.”

“I will be very sad to leave at the end of 2022, but it is time for me to move on but with plenty of time to ensure we have an orderly transition.”

“I feel privileged to be the founding CEO of such an extraordinary organisation and to have been blessed to have the support and guidance of three highly esteemed Chairs and an outstanding Board.”

A comprehensive recruitment process is now underway to identify a successor to Ms Davison.