Delivered by the Moriarty Foundation, Indi Kindi is a holistic Indigenous early years initiative for children under five years of age that integrates education, health, wellbeing, and community development. The program currently supports 80 per cent of Indigenous children in Borroloola and Robinson River, and uses a co-designed and community-led approach to address 11 of the 16 Closing the Gap targets.

“Indi Kindi is the only Indigenous early years program UNICEF Australia has chosen to partner with based on its proven sustainable model, ability to drive transformational change, and the immense impact it has on the community,” UNICEF Australia Chief Executive Officer Tony Stuart said.

Moriarty Foundation Honorary Managing Director and Co-Founder, Ros Moriarty, commented on the significance of the expansion, saying “UNICEF’s charter in Australia is closely aligned with our objectives in that it is an advocate for children’s equality, regardless of remoteness or life circumstances.”

“The expansion of Indi Kindi is the culmination of many years of hard work by our local Indi Kindi educators and Community Advisory Group. They have shown that an initiative that is co-designed within an authentic Aboriginal worldview, is able to successfully close the gap and have immense long-term benefits for our children and community,” Moriarty Foundation Co-Founder and Co-Chair John Moriarty echoed.

The expansion of Indi Kindi to Tennant Creek in the Northern Territory and Kuranda in Queensland will create 20 new jobs, along with volunteering opportunities.

The expansion of Indi Kindi to Tennant Creek in the Northern Territory was made possible due to UNICEF Australia’s recently announced domestic partnership with Livingstone International. This partnership will support early childhood development programs for Indigenous children living in remote communities in the Northern Territory and reach some of Australia’s most vulnerable children, such as Indi Kindi.

Led by community, for community

Garrawa woman, and Indi Kindi educator Deandra, lives with her children in Borroloola, in the Northern Territory – one of the most disadvantaged and remote communities in Australia, and her experiences with the program serve as an example of the significant change it makes possible.

She first became aware of Indi Kindi when she attended a session with her one year old son, Leonardis.

When Leonardis was three, Deandra talked to the Indi Kindi team about employment opportunities.

“I said to myself: I’ll stay with this job and make a commitment to come to work every day, to be with the kids, to help them learn and be ready for school,” says Deandra. “I want the kids to get a good future and get a good job.”

This month, Deandra celebrates five years of employment as an Indi Kindi educator. She is also studying her Certificate 3 in Early Childhood Education and Care through the Batchelor Institute.

“When we drive around the community, the kids get excited, they come running and say Indi Kindi is coming! They try to get on the bus and I have to tell them to wait so we can open the doors,” she says.

“Every morning I see their smiling faces and it makes me happy. The young mums see us as an inspiration as we are teaching their kids.” 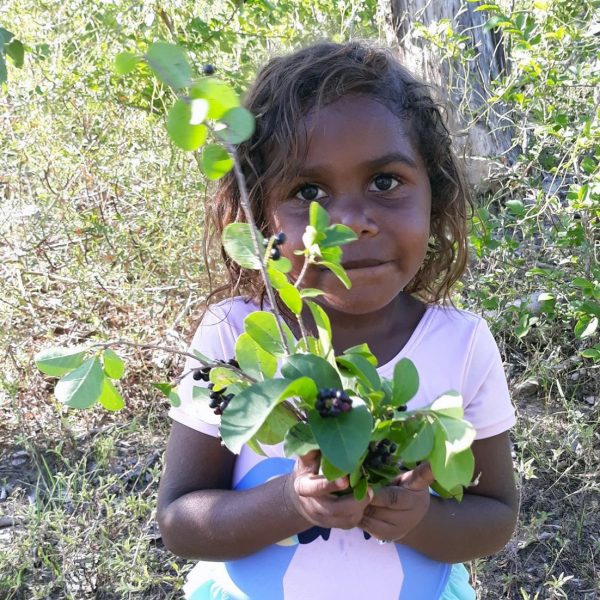