“Australian Early STEM education is thriving and we are proud to be at the forefront – delivering quality professional development for early childhood professionals,” a Little Scientists spokesperson said.

The National winner was Bambou Early Learning Centre, from Glen Waverley Victoria, who blasted off into space with an inquiry based project that began with a lively discussion among the children about the SpaceX Crew Dragon launch.

Using the children’s perceptions and perspectives as the cornerstones of the project, educators used this opportunity to familiarise the children with the scientific method through intentional teaching.

The project integrated a number of different curriculum areas such as dramatic play, construction, literacy links and the arts. A highlight of the project was an online interview with a lecturer from the Australian Space Agency that allowed children to participate from home.

In New South Wales, Maroubra Junction Early Education Centre were recognised for their commitment to inquiry-based STEM learning with an innovative project that saw the children following the design process from ‘conception to final product’.

Building on a recent space project, the children wondered what and how people eat in space, and started exploring nutrition and the practicalities of eating in space, quickly becoming fascinated by the difficulties of receiving and eating food in zero gravity, and working to produce a solution for hungry space travellers.

South Australian winners, Nido Early School, from Kensington Park, explored the wonder and value of bees in a project that included pressing flowers, making perfume, and sculpting their own bee statues from clay.

The multi-layered project drew on many scientific concepts applying to children’s everyday lives, and involved using digital microscopes, observing nectar and pollen, and experiencing tasting honey and smelling blossoms. Judges described the entry as being “a genuine example of what can be achieved when children and teachers research together”.

Concordia Lutheran College Hume Street Kindergarten were the winners for Queensland, where children built on their previous learnings about space by exploring how humans might be able to live on other planets.

Starting from a list of “must haves” for survival, such as farms to grow watermelons, cities to live in, and some way of managing waste, children and educators became engineers, hypothesising and testing each person’s ideas about how to live safely elsewhere.

Judges praised the team for their alignment with the 2020 theme – Quirky Curious Futures – the collaborative nature and understanding of the scientific process, and for the thinking involved in the project.

Fittingly for 2020, the state level winner for Victoria was the Professor Lynn Corcoran Early Learning Centre (FROEBEL), who were recognised for their project ‘germs are not for sharing’.

The germ research project ‘emerged naturally’ as a consequence of the COVID-19 pandemic, and was “an honest and accurate way to support children in making sense of their world” and minimising any anxieties or fears.

Given the location of the service, being attached to a hospital, many of the children had “astounding prior knowledge of germs,” which educators built on by growing and observing germs in their lab and engaging in drama, visual art, music and literacy, which all helped to promote their understanding of current events.

Every day the children observed how the germs were growing in the sealed petri-dishes. They compared and documented the speed, amount and types of germs that grew, multiplied and perished in the three conditions and concluded that they had documented the least organisms growing from sanitised hands. The parents and the wider community were very involved, donating equipment, resources and technical know-how and even arranging for the germs to be analysed in a top research lab.

The award panel was impressed with the systematic long-term approach, which actively integrated the children’s interests, skills and abilities, and with the thoughtful approach that educators took to understanding children’s prior knowledge as a place to launch learning.

State winners for Tasmania, Western Australia and the Northern Territory will be announced in the coming week, with full details and photographs from all the winners available here. 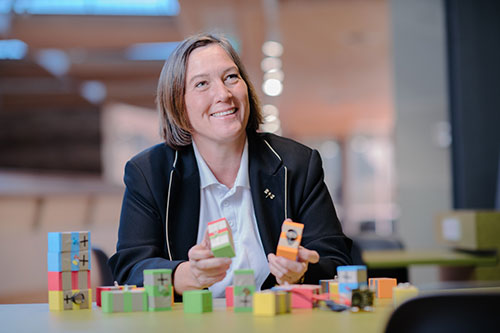 Encouraging STEM inclusivity for those with disabilities during National Science Week