Early childhood education and care (ECEC) real estate and business broker Burgess Rawson has completed its May auction campaign in which six ECEC centres were sold for a combined total of $16.6 million.

The centres, located across New South Wales, Queensland and Victoria, ranged from 27 to 90 licence places in size and achieved yields ranging from 4.27 per cent at the lower end and 5.78 per cent at the higher end.

Yosh Mendis, the Sydney-based Head of Agency for Burgess Rawson, says: “The big thing for us is that commercial property, including childcare, remains investors’ preferred investment because it offers a stable and secure income stream.”

“We are seeing investors pulling money out of the stock market because of its volatility and redirecting it to commercial property because it’s a positively geared asset.”

With an average yield of 5.04 per cent for the six childcare centre sales, Burgess Rawson’s Brisbane-based Head of Agency Adam Thomas described childcare as “an essential service underpinned by bipartisan political support – and investors are paying a premium for the businesses that have strong fundamentals.”

“We’ve overseen the sales of 94 childcare centres since January 2021. Many have been on large sites with high land values and are performing very strongly in the market. It’s often the property and the business with good operators and strong lease terms at the same time,” he added.

Mr Thomas says there is a lot of focus on early education in Australia from leading local and international investors at this moment. “We are seeing particularly strong interest from overseas investors from North America, northern Europe, and mainland China.”

Ararat, VIC – 50 place centre leased to Ararat Childcare and Kinder Retreat sold for $1.59 million, a yield of 5.47 per cent

Mr Thomas noted that ongoing corporate activity in the child care sector had additional impetus to the market, in particular Bright Horizons’ recent purchase of Only About Children for $450 million with Burgess Rawson’s Associate Director of Childcare, Michael Vanstone adding that he expects the favourable childcare investment conditions to continue.

Burgess Rawson continues to take expressions of interest in development sites including a soon-to-be-built Montessori Academy in St Marys, NSW.

“It’s a new centre with a rare triple-net lease offering substantial depreciation benefits in the heart of Western Sydney’s growth hotspot and one we are seeing substantial interest in,” Mr Vanstone said. 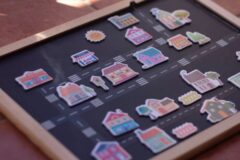