The child-care sector needs an overhaul, not more tinkering with subsidies and tax deductions

The child-care sector needs an overhaul, not more tinkering with subsidies and tax deductions They also say it would give greater choice to families whose working hours aren’t suited to mainstream centre-based child care.

The proposal draws on research and modelling by the UNSW New Economic Policy Initiative. The policy report, published in November 2019, suggests families be given a choice between continuing to receive their current child-care subsidy, or opting instead to pay fees up front and claim them as a tax deduction.

Both Labor and the Coalition appear to be focused primarily on child-care affordability and encouraging parents to work more. But tinkering with subsidies risks making a complex system even more complicated, and detracting attention from quality, which matters to children.

The UNSW policy proposal aims to address concerns raised by the Productivity Commission in a 2014 report, which found:

[…] tax deductions or rebates are not an effective means of support for lower and middle income families who, in the absence of ECEC [early childhood education and care] assistance, are likely to have the greatest difficulty affording care.

In the policy, because families would choose what’s best for them — either a tax deduction or the use of a subsidy — the idea is no family would be worse off.

But the benefits of opting into tax-deductible child care still wouldn’t be evenly distributed if the Liberals adopted the policy. According to the UNSW modelling, households with the highest incomes would benefit most from the policy, saving around A$1,080 per year more compared with their current spending on child care. Families on lower incomes could save around $618 compared to what they’re currently spending. 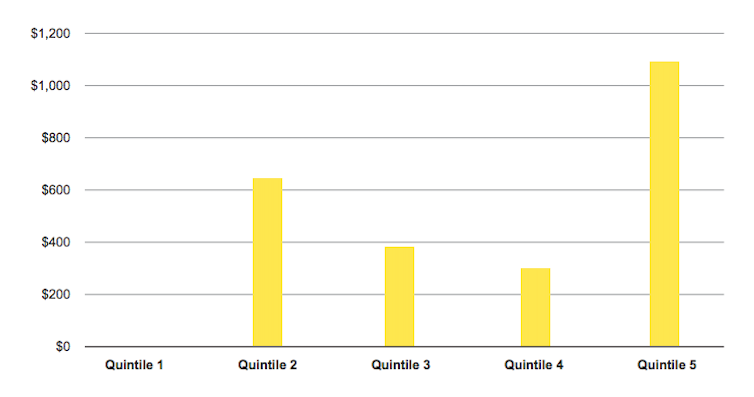 The figure above shows the annual benefit for (couple) households by quantile.

Families on lower incomes would be also be less likely to opt into the tax deduction. Even if they were to save as a result of it, they would be less able to pay full child-care fees up front.

On the other hand, Labor’s proposal for early childhood education and care focuses on low-income families first, by extending the subsidy. It would increase the maximum child-care subsidy from 85% to 90% for the lowest-income families in the short term, with a long-term plan of increasing the subsidy to that rate for all families.

Labor would also scrap the annual $10,560 subsidy cap for households earning between $189,390 and $353,680 a year. Education Minister Tehan argued Labor’s plan would benefit higher-income families at the expense of the more disadvantaged. He said in the long run it would result in “a family in Townsville […] subsiding the child-care fees of a millionaire living in Sydney”.

This is because Labor’s plan would increase subsidies for all families, compared with the current system which is means-tested and requires families on the highest incomes to pay full child-care fees.

One potential objection to this two-pronged approach is that it would benefit high-income earners. There are, however, three important answers to this: first, it ignores the actual distribution of the likely benefits of the policy; second, it misconceives the nature of the policy (as welfare— rather than productivity-focused); and third, it ignores the significant gender equality and fairness arguments in favour of the policy.

Whether the policy benefits high-income or low-income families matters, but it also misses the point — early childhood policies need to focus on what benefits children.

With over one in five children still developmentally vulnerable when they start school, Australia needs to be talking about how early childhood services can support children to learn and thrive.

This support needs to be available to all children, irrespective of their parents’ incomes.

Research shows that for every dollar invested in early childhood education, $2 is returned into the economy. Evidence also shows that while all children benefit from early education, children from the most disadvantaged backgrounds stand to gain the most.

But these benefits are reliant on high-quality, play-based learning supported by skilled, warm and responsive educators.

Parental workforce participation is important for economic growth, but the long-term benefits to children’s learning and development can pay even greater dividends.

It’s great both parties are thinking about early childhood policy, but they need to start looking at the whole picture.