The opening of the campus will be of interest to early childhood education and care (ECEC) providers in Australia, and Queensland specifically, as the country continues to combat workforce shortages.

In his remarks, Mr Dutton said the campus “would forever change the educational, employment and earning potential of one of Australia’s fastest-growing regions”.

The campus includes $15 million of technology, and is tipped to promote innovation in the region, and also to expand and create new opportunities in a variety of sectors and industries, including early childhood education and care (ECEC).

USC’s Vice-Chancellor Professor Greg Hill thanked Mr Dutton for his efforts in securing the $121 million Commonwealth loan that enabled construction of the foundation building as stage one of the new campus.

Professor Hill explained that the Moreton Bay region was “significantly under-represented” in higher education and had been the only location of its size in Australia without its own full-service university campus.

“Today, that has all changed,” he said. “We now have the exciting opportunity to harness the region’s true potential, significantly boosting education opportunities for local residents with jobs-focussed programs that have been tailored to meet local needs.

Semester One enrolments have already exceeded expectations, across the 50 undergraduate programs on offer, reflecting the strong demand for university education in Moreton Bay.

Moreton Bay Regional Council provided the land required for the project, something Professor Hill said reflected the “humbling” support from the local community.

“It must be said, if not for the vision and determination of the Moreton Bay Regional Council and its Mayor, this might not have eventuated in this way. If not for the Commonwealth and State Governments recognising the untapped potential in this region, it would have made the journey to this point a lot, lot longer. And, of course, without dedicated and passionate USC staff this would never have been possible,” Professor Hill added.

The USC Moreton Bay foundation building was designed by Hassell Studio and built by construction firm Hansen Yuncken over 18 months. The huge central atrium is suitable for community events, and has been designed to cater for rapid growth of the student population (up to 3,600 students) over the campus’s first three years.

USC Moreton Bay currently offers almost 50 undergraduate degrees including early childhood education.The campus is tipped to grow significantly over the next decade, with an anticipated student population of 10,000 by 2030.

It will become the centrepiece of Moreton Bay Regional Council’s ‘The Mill at Moreton Bay’ development, which was declared a Priority Development Area by the State Government in 2016. This development will include commercial and residential areas, as well as large areas that will be returned to nature.

More information about USC Moreton Bay can be found here. 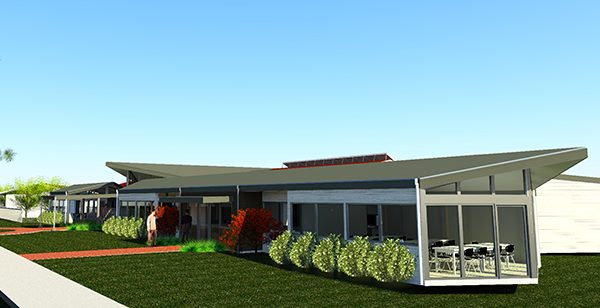 OAC saluted in 2019 Local Business Awards, with wins for Asquith and Albert Ave