With the introduction of science, technology, engineering and mathematics (STEM) based subjects being a ‘hot topic’ in educational conversation at all levels from birth to tertiary, The Sector Editor Freya Lucas recently spoke with Associate Professor Amy MacDonald to learn more about her research, early childhood and the field of STEM, and her work with Little Scientists.

We began our conversation by trying to learn more about why STEM, and its cousin STEAM, which includes the Arts along with the traditional STEM subjects, is such a prominent conversation in the early childhood education and care sector at present.

“I think early childhood educators are our original and best leaders of integrated curriculum approaches such as STEM,” Associate Professor MacDonald said, admitting that she is sometimes “bemused” by what she calls “the STEM storm”.

The bemusement comes, she said, because STEM is at its core about integrating curriculum areas in meaningful ways – something early childhood educators have always done well, through their emphasis on child-led meaningful play and investigation.

In essence, STEM is about core components of the approved learning frameworks – awe and wonder, and using the knowledge and processes of the “technical” disciplines (science, technology, engineering, mathematics) to help children and educators alike to pose, ponder, and solve problems that are meaningful to their worlds and contexts.

Because of this, Associate Professor MacDonald, young children are her biggest inspirations in the STEM learning space.

Simply put “if you want to know how to “do STEM”, look at our youngest children. Every day, young children are curious, creative, and creating. The notice things and wonder about them. They investigate and try to understand. They use their own capacities in resourceful ways, and they’re not afraid to call upon the resourcefulness of others when they need help, or when they just want to share curiosities and discoveries with another,” she said.

Measuring the impact of STEM

Through her work with Charles Sturt University (CSU), Associate Professor MacDonald has recently worked with a team of researchers to measure the impact of STEM early education in Australia through an independent evaluation of the Little Scientists program.

The comprehensive three-year study mapped the program to Australia’s national curriculum frameworks for both early childhood and school, and conducted surveys with more than 600 educators around Australia.

As part of the broader undertaking, five Professional Learning Networks were formed, to help, educators around the country connect and share their experiences of the program. The program was evaluated against a framework for effective education that was based on recent research by members of the evaluation team.

At the conclusion of the three year period, the researchers found that the Little Scientists program was a success because of its base of inquiry based learning.

“It’s all about exploring children’s questions and curiosities in meaningful ways using everyday materials. It’s an approach that has a lot of appeal to early childhood educators, and it seems to provide a comfortable entry point to STEM education for those educators who may feel a little less-than-confident when it comes to science, technology, engineering, or mathematics,” Associate Professor MacDonald said.

The CSU research team comprised of Associate Professor Lena Danaia, Dr Shukla Sikder, and Dr Carmen Huser, each of whom bought ‘unique expertise and skills’ to the project which was funded by FROEBEL Australia.

A variety of partner organisations and networks were involved in the research, with special acknowledgement made by Associate Professor MacDonald to the support of the Northern Territory Department of Education who assisted the CSU researchers to access remote networks of early childhood educators in the NT.

Taking STEM to the streets – of the world

While STEM is a much discussed topic in the education sector, very little research exists to outline what is considered to be effective early childhood STEM education, Associate Professor MacDonald explained.

“Our study certainly makes a contribution in this space, as explained in a recent peer-reviewed publication about the evaluation study,” she said.

“I’m also really excited about a new three-year project with Little Scientists that we are commencing in 2020. The new project will focus on the children’s participation in, and perspectives on, STEM inquiry-based learning. This new research will use cutting-edge approaches to bring a new perspective on early childhood STEM education. We think this research will make an important contribution to the international STEM agenda by drawing attention to our youngest STEM learners.”

“I then travelled to Berlin, where I had the opportunity to learn more about the origins of the Little Scientists program. I presented the findings of the Australian evaluation to both the Haus der kleinen Forscher Foundation (the German “Little Scientists” Foundation) and the Froebel Foundation in Berlin, and met with their research and development teams” she said, sharing her excitement about the ‘huge potential’ for international research collaborations among these organisations.

To learn more about Associate Professor MacDonald’s work, please see here. Information about the Little Scientists program, including how to become involved, can be found here. 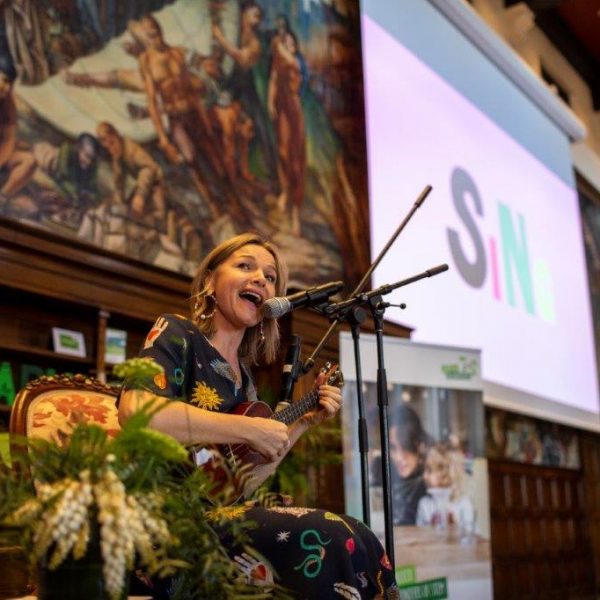