Charter Hall Education Trust (CQE), the ASX listed real estate investment trust specialising in early education centres formerly known as Folkestone Education Trust, has released its half year report in which it sounds an upbeat note on sector fundamentals despite reporting a dip in statutory profits.

In particular, the report confirmed better affordability levels post the implementation of the Child Care Subsidy (CCS) as a driver for increased demand for early learning services and cited anecdotal evidence indicating that January occupancy levels driven by stronger CCS driven re-enrollments were up between 2 to 3 per cent on the same period last year.

Nick Anagnostou, Head of Social Infrastructure said “The sector is experiencing improving participation rates and there is greater overall affordability for parents via the CCS regime.”

The report went on to note that a more stable supply outlook is expected in 2019 as bank lending criteria tightens further, local councils become more discriminating when evaluating development approvals and operators remain cautious of portfolio expansion, and that to some degree developers have already responded to the more restrictive conditions with the number of new Long Day Care openings falling substantially in Q4 2018.

This more subdued supply outlook has also been reflected to some degree in the Charter Hall pipeline which as at 31st December 2018 contained only one new contracted site compared to four in June 2018, seven in December 2017 and eight or more in June 2017, December 2016 and June 2016 respectively.

Mr Anagnostou noted that although the group considers development sites to be an important renewal element for the sector, CQE has slowed contracting new sites because of challenges finding “proper opportunities and also increased difficulty in getting development applications” which has resulted in the drop experienced.

A reduction in the number of sites being contracted to join the pipeline signals discipline is being prioritised over growth which over time, if maintained, will lead to a fall in the rate of new centres being opened by the group which will ultimately support their comments on future supply dynamics abating. 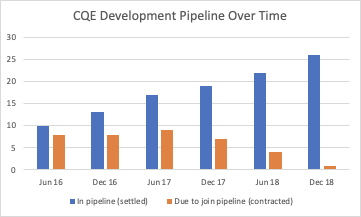 Other key highlights of the report included:

Overall Mr Anagnostou noted that “CQE re-positioned its portfolio over the last 3 years in recognition of pending industry change. We profited from asset sales and although there was a subsequent impact on the first half’s earnings growth, we are now well placed to target new opportunities with conviction.”