Preschoolers who spend time in nature-based learning programs, such as bush or beach kinder, emerge from early learning with a stronger understanding of science, technology, engineering, and maths (STEM), a Deakin University study has shown.

Girls in the study were found to benefit most from bush and beach kinder, with researchers speculating that this is because they enjoyed greater freedom to play creatively with unstructured natural materials.

Deakin researcher Chris Speldewinde is responsible for the study,  Bush kinders: enabling girls’ STEM identities in early childhood, working alongside fellow Deakin academic Professor Coral Campbell on the findings, which were funded by the Centre for Research for Educational Impact.

The study looked at the outcomes of children who spent one year attending bush kinder once per week as part of their normal kindergarten curriculum.

Interacting with fallen leaves, sticks and fixed natural structures such as trees helped young children form an understanding of technology that could lead to early experimentations with engineering, the researchers said. Investigating the science of floating and sinking using natural materials and small bodies of water also had benefits, as did using sticks to draw in dirt or sand.

“Unstructured, outdoor play allows girls and boys to put away their dolls and stuffed toys and interact creatively with the environment around them to learn crucial STEM fundamentals,” Mr Speldewinde explained.

“This is important if you consider job opportunities in STEM are among the fastest growing in Australia. People with qualifications in STEM also earn more than those without STEM qualifications.”

While the benefits of nature-based learning programs, which have become increasingly popular in the United Kingdom and parts of Europe over the past half century, are well researched, Mr Speldewinde said the benefits of STEM-learning in these environments had, until now, received little research attention.

Dispositions of confidence and curiosity are fostered in the nature spaces, while learning in these spaces had the added benefit of fostering an appreciation for the environment among young children and provided an early opportunity to expose them to Indigenous cultures.

“All Victorian kindergartens, where possible, should aim to integrate a day of bush kinder into their curriculum each week,” he recommended, acknowledging the challenges of a lack of training, educator confidence, and problems finding an appropriate location in implementing this recommendation. 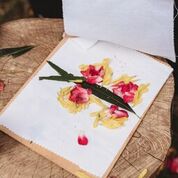