Arena REIT have released a solid set of FY2020 results and confirmed an increase in their early learning centre (ELC) development pipeline to 17 centres, the highest level for at least six years, and equivalent to around 8 per cent of their current ELC portfolio.

Net property income, the key driver of operational performance, was up 10 per cent compared to the same period last year, rising to $53.9 million, driven by rental increases of 3.8 per cent in its ELC portfolio of 211 centres and 2.6 per cent in its healthcare portfolio of 11 properties, as well as contributions from four newly acquired operating properties and the completion of three development sites.

Although operating costs increased by 9 per cent a substantial fall in finance costs of 22 per cent mitigated the overall increase which fed through to the REIT reporting net operating profits up 16 per cent to $43.8 million.

Commenting on the results Arena’s Managing Director Mr Rob de Vos acknowledged the impact and challenges COVID-19 has brought to many communities, expressing his gratitude, on behalf of Arena, to its tenant partners and the front line workers in each of Arena’s early learning and health care properties.

“Despite ongoing uncertainty, we remain confident in Arena’s strategy, the strength of our portfolio and the important contribution the services we accommodate will make in aiding economic recovery and improving future community outcomes” Mr de Vos said.

Over the course of FY2020, Arena have expanded their development pipeline quite materially as they seek to position the organisation for future growth and fulfil their strategic priorities.

As at June 30 2020, the pipeline consisted of 17 early learning centres, up from six at the same time last year.  It is unclear precisely how many of these centres were settled prior to the COVID-19 outbreak commencing, however we do know that as at December 31 2019 the group had 14 centres in their pipeline. 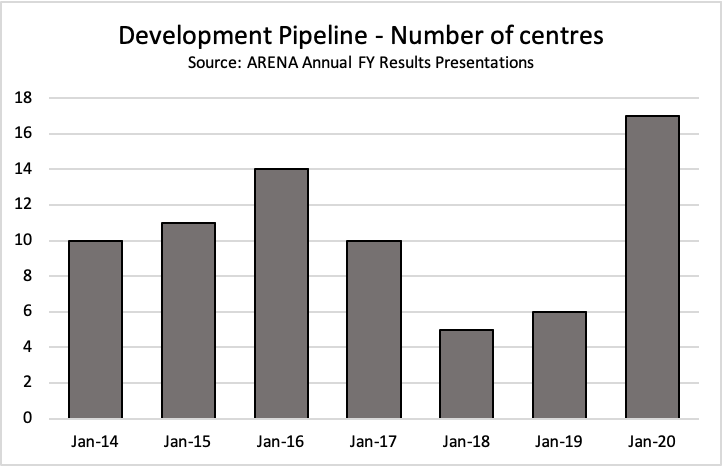 That being said Arena now has an ELC pipeline equivalent to around 8 per cent of their 211 operating centre portfolio and at an absolute level not seen for at least the past six years.

This positioning, although lofty compared to history, is broadly similar to peer Charter Hall Social Infrastructure Fund who currently have 24 developments in their pipeline, equivalent to about 6.5 per cent of their portfolio.

The impact of COVID-19 on annual rental receipts has been muted with the REIT confirming that for the 12 month period ended 30 June 2020 96 per cent of contracted rent has been received, 3.5 per cent has been deferred and only 0.5 per cent abated.

In the three months to June 2020, 84 per cent of contracted rent has been received with 14 per cent deferred to be paid at a later date. Around 10 per cent will be received in FY21 with the balance thereafter.

The annual average rental increase was 3.4 per cent in FY20 with the ELC portfolio generating a 3.9 per cent increase. This is slightly higher than the 3.8 per cent recorded last year.

The weighted average lease expiry (WALE) of the lease book of ELC’s was 14.2 years, slightly higher than the 14.1 years reported last year with the net rent to operator revenue ratio coming in at 10.7 per cent.

Notably, the Group highlights that occupancy levels have rebounded and are now “generally within 5 per cent of pre-COVID-19 levels and higher in some cases higher.”

The Group currently has $76 million of cash on balance sheet, due largely to the raising of $60 million by way of an institutional placement and $25 million received from retail investors via a SPP.

Consistent with Charter Hall, ARENA have increased their debt facility limits and now have a total facility of $330 million up $50 million of which 65 per cent, or $215 million with a corresponding cost of debt of 3.55 per cent, 10 basis points lower than FY2019.

Overall debt levels are marginally higher than they were at 31 December 2019, suggesting that Arena have elected not to direct substantial amounts of raised capital to pay down their existing debt levels, instead electing to preserve the cash on balance sheet.

Nevertheless, gearing levels are now down to 14.8 per cent, compared to 22.1 per cent at the same point last year.