Perth-based artist and designer, 23-year-old Tyrown Waigana has been announced as the winner of the prestigious National NAIDOC Poster Competition, with his entry Shape of Land judged by the National NAIDOC committee as being the best illustration of the 2020 NAIDOC theme of Always Was Always Will Be.

Mr Waigana – who has a Bachelor of Arts majoring in graphic design, advertising and illustration and photography – runs his own brand and business Crawlin Crocodile, and has had a passion for art and design from an early age.

A proud Noongar and Saibai Islander man, Mr Waigana has previously been named as one of Western Australia’s best new and emerging Indigenous artists, with his NAIDOC poster work depicting the Rainbow Serpent coming out of the Dreamtime to create the country we know as Australia. 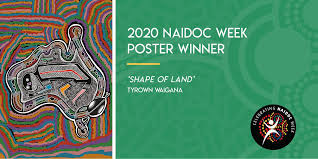 The figure inside Australia, he continued, is a representation of Indigenous Australians, demonstrating “that this country, since the dawn of time, always was and always will be Aboriginal land”.

Mr Waigana was congratulated on his achievement by committee co-chairs, Pat Anderson and John Paul Janke, who thanked all other entrants for their submissions in this year’s competition, which attracted 270 entries from around Australia.

As well as having his artwork displayed on the 2020 National NAIDOC poster, Mr Waigana will recieve a cash prize of $10,000.

NAIDOC posters are distributed across the country to schools, kindergartens and universities as well as to Government Departments, organisations and shopping centres, and will be sent shortly. Posters are also available for digital download, with the 2019 poster being downloaded nearly 50,000 times.

For more information about NAIDOC week, which will now be acknowledged in November due to COVID restrictions, please see here. Calendar notes for 2020: NAIDOC Week – theme announced: Always Was, Always Will Be NAIDOC Local Grants round now open – prepare to celebrate Always Was, Always Will Be