Doctor Larry L Kimura, Associate Professor of Hawaiian Language at Ka Haka ʻUla O Keʻelikōlani College of Hawaiian Language at the University of Hawai’i Hilo led the 2019 Narrm Oration at the University of Melbourne yesterday evening, sharing important lessons for the Australian early childhood education and care (ECEC) sector about the importance of embedding Indigenous languages in early childhood programs to prevent languages from being lost.

Dr Kimura shared lessons from the “ambitious work” that has been undertaken to revitalise the Hawaiian language through early childhood education.

The Narrm Oration profiles leading Indigenous thinkers from across the globe at the University of Melbourne, with 2019 being the 11th such speech delivered.

During the Oration, Dr Kimura presented on the “remarkable reawakening” of the Hawaiian language, with new generations of highly fluent second and first language Hawaiian speakers emerging thanks to his efforts which began in the 1970s, when it was realised that the language that was in danger of being lost.

Worldwide, a language disappears nearly every two weeks with the death of its last native speakers. Hawaiian, a Polynesian language, was in danger of disappearing completely when Dr Kimura first began his work.

During the 1960s Dr Kimura recorded the last native Hawaiian speakers and throughout the next two decades he hosted the Ka Leo Hawai’i radio program, broadcasting some 525 hours of first language Hawaiian speakers.

Through this work, there was a resurgence in the language, and alongside this, “a growing pride and awareness of Hawaiian culture, helping the indigenous Hawaiian population to reconnect with their heritage” Dr Kimura said.

During the 1980’s, there was “no funding, no site, no curriculum and a law that forbade the use of Hawaiian as the medium of education” however from these dire straits, Hawaiian has been immersed into the state’s public school system and the Hawaiian Department of Education now administers 23 Hawaiian language immersion programs throughout Hawaii, with many sites requiring more space to accommodate increasing enrollment.

Speaking about the impact made by the Oration, Professor Shaun Ewen, Pro Vice Chancellor (Indigenous) of the University of Melbourne said it was “deeply inspiring” when considered in the Australian context, where approximately 90 per cent of Aboriginal and Torres Strait Islander languages are critically endangered.

“Listening to Dr Kimura gives us the opportunity to reflect on, and understand, Indigenous languages as Indigenous Knowledge, and how this adds to the richness of our endeavour as a University,” Professor Ewen said.

More than 250 Indigenous Australian languages including 800 dialectal varieties were spoken on the continent at the time of European settlement in 1788.Only 13 traditional Indigenous languages are still acquired by today’s children and approximately another 100 are spoken to various degrees by older generations, with many of these languages at risk as Elders pass away.

“The importance of language to Indigenous identity, self-esteem and community pride cannot be overestimated. Dr Kimura showed us the power of what can be achieved, and we hope to be able to contribute to similar efforts across Australia,” said Professor Rachel Nordlinger, who heads up The 50 Words Project at the University.

The Narrm Oration was followed by a panel discussion on language revitalisation in Australia.

Narrm is the name of the Country of Melbourne that is home to the Boon Wurrung and Wurundjeri peoples of the Kulin Nation. For more information on the Narrm Oration, please see here. 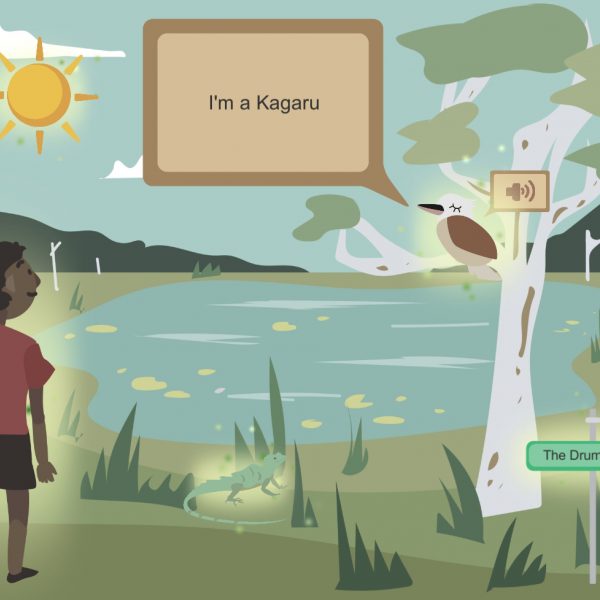 Language program kicks off in Victoria with 100 services on board